We all look into our dog’s eyes and know that there is a lot going on in their heads. But just how much? And what, exactly? Check out these five fun facts about dogs and their ability to think and communicate.

Dogs can learn up to 250 words! They can learn the names of objects, as well as signals. Until recently, only humans and certain primates were believed to have this ability. Have fun with your dog by teaching him or her tricks, commands, names of their toys, and names of people in the household. Dogs can also count up to 5, and perform simple math equations. Many researchers believe the intelligence of a dog is comparable to the intelligence of a 2 year old human child. 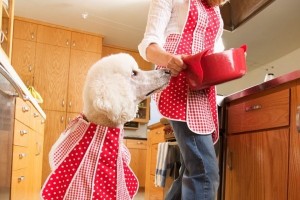 Dogs adapt quickly to humans and learn easily from human behavior. Dogs will look to humans for answers and are smart enough to mimic a human to achieve a desired result. In one study, puppies were shown that if a lever attached to a box is pressed by a human, the box will open and a treat can be retrieved. After the demonstration about ¾ of the pups in the group pressed the lever to receive the toy, indicating a clear understanding and ability to learn. The ability of dogs to learn from humans seems almost second nature and we are still learning about just how much they can learn from us. In one real world example, stray dogs observed in Russian cities have learned to use the subway system to travel to more populated areas for food.

Service dogs are often believed to be the most learned of the dogs. Their ability to lead their humans through busy areas and maintain their composure is simply amazing. Experienced service dogs know it is time to focus on their tasks when their harness is put on. When the harness comes off, they become more relaxed and silly like other dogs. They are also taught to go to the bathroom on command so that their owners will have an easier time picking it up. The person will usually give a verbal command, and the dog will pace in a small space and get comfortable and go to the bathroom. 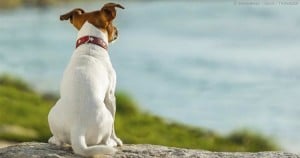 Dogs understand the concept of “object permanence.” Object permanence is the ability to understand that an object still exists even when they cannot directly sense the object. For example, they know that one of their toys is still out in the yard or in the other room even though they are not looking at it.

Dogs can feel envious! Studies have shown that dogs fully understand when they do not receive the same treatment as other dogs. In one study, dogs were both asked to do the same trick. One dog was rewarded with a treat, while the other was not.  The dog that was not given a treat soon became disinterested and did not want to make eye contact with the other dog that did receive a treat. Dogs in a separate group were more likely to complete the trick with no reward, so long as they did not see another dog getting rewarded for it! 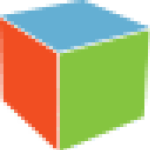